The Case Against Conservatism: A Clear and Present Danger

New Mexico County Official: 'The Only Good Democrat Is A Dead Democrat':

Ladies and gentlemen of the Progressive and Secular communities. Let the words of Couy Griffin, a Conservative Republican, sink into your mind. With the above link to a video recording what he said, it is now openly submitted before you a presentation of facts and a warning of a great danger that we are facing in these unsettling times that we are currently living in. All of us are now faced with an existential threat. That existential threat is of a specific kind. It is not the only threat that endangers our existence, such as global climate change, which has been going on since the beginning of the Industrial Revolution, or the more current covid-19 plague that is keeping the majority of us with any good sense safely in our homes, though both of those are just as dangerous. If these were not bad enough, we all face a more insidious threat, and it is one that is a tripple threat. And that threat is ideological, political, and religious, all wrapped into one dark nasty, viscious ball. That threat is Conservatism.

Conservatism is a false ideology based on the presumption that things must remain the same, supposedly, for the good of all: traditions must be kept and conserved so that the established power structure and hierarchy and a strict social and economic order must be maintained.

But why must everything stay the same? Is it not better for everyone's boat to rise at once? Even though it would be better for the greater good of all of society to give equal economic and social opportunity to individuals in order to better themselves and their families, this is viewed as a threat to the Conservative. Change is anathema to Conservatism.

Any idea or policy which will upset the Conservative apple cart or rocks the Conservative boat, even if it means equality or greater economic participation, is viewed as a threat and therefore must be opposed and prevented at all costs by the Conservative. This is what essentially makes Conservatism so dangerous, as it is selfish and egocentric, seeking to aggragandize and maintain the power and control of Conservative elites, which is why Conservatism's main emphasis is on empowering the wealthy and superwealthy, for without economic power there can be no maintenance of political power at the expense of the middle and lower classes. As far as the Conservative who has power and money is concerned, if you ain't got the dough you ain't got a say, therefore those of us who have little to no money, according to the Conservative, do not deserve any rights or political influence.

An Ideology That is Bigoted and Racist

At the heart of Conservatism is a suspicion, distrust and resentment of “the other.” The Conservative views other people of differing skin color, ethnic origins, sexual orientation, and cultural difference with bigotry. Those who look different, act different, speak a different language, or live differently, and/or are from a lower economic class background than the Conservative will be treated by the Conservative with hostility and agression. Blacks, Hispanics, Native Americans, and the poor, the LGBTQ, even people of faiths other than Christianity, or who are atheists and Freethinkers are viewed by the Conservative with disdain and contempt. These are the people that the Conservative sees as being unworthy of attention other than to berate and deride. This is why one sees a majority of Conservatives who are white, though there are some exceptions as one can find African-Americans and Hispanics among the Conservative elite and rank and file, especially if they have a modicum of economic power and influence. By and large though, Conservatives are, in large part, white and view other people unlike them as a threat because they represent change, and people who seek change, in the Conservatives' eye, must not be allowed to seek or gain political power. This is why Conservatives who are in power often enact or seek to enact legislation that disenfranchises Blacks, Latinos, and Native Americans. 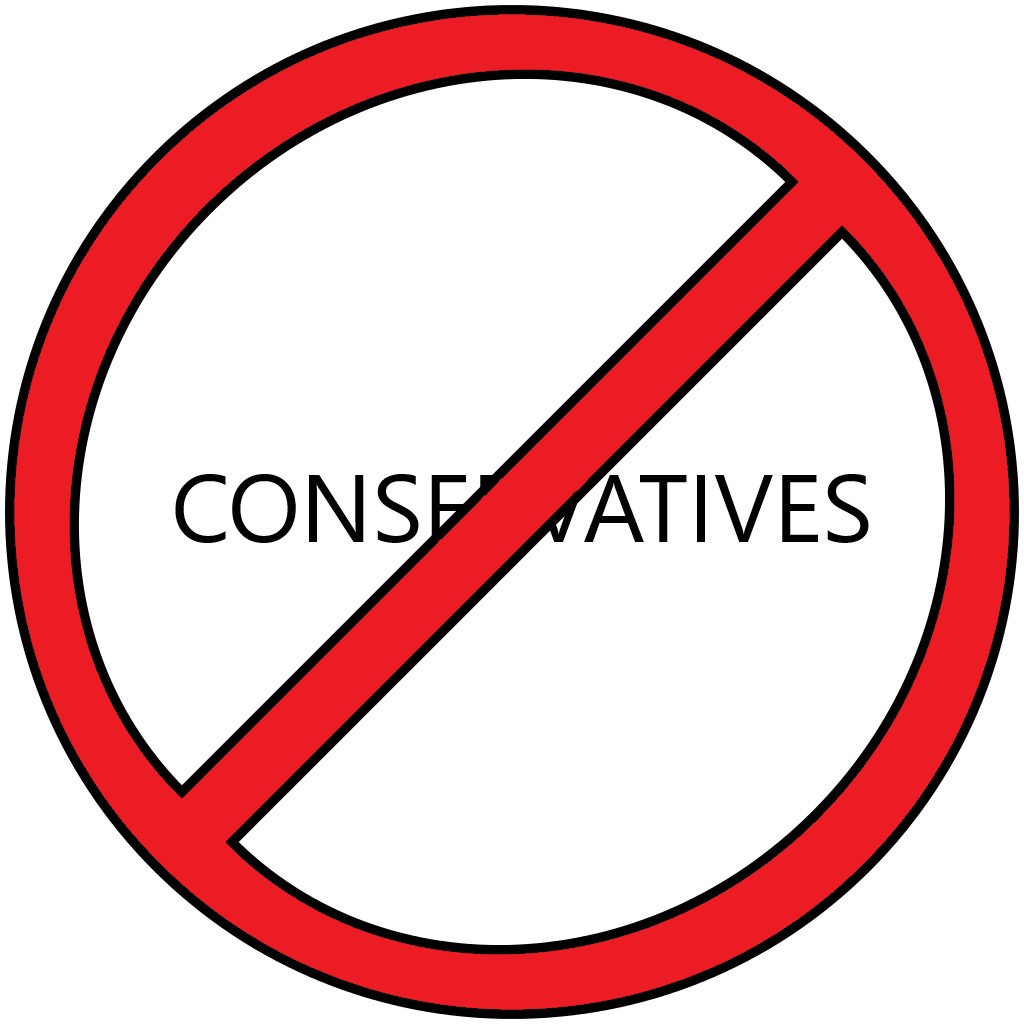 An Ideology Which Is Religiously Obnoxious

Though not all Christians are Conservative, all Conservatives are Christian. More specifically, Christians of a particular theological bent, in the flavors of Christian Reconstructionists, Dominionists, and Christian Nationalists. Many of them include Evangelists and Apostolics in their midst. These Christians are zealous extremists and theocrats all. They view their brand of Christianity as the one and only “True” Christianity that must be imposed on everyone. These are the kind of Christians who are not content to just live their faith as an example. They must exhibit their faith aggressively and obnoxiously by demanding that people must convert to their theology. Their faith is largely political, which is expressed by exerting undue influence by enacting legislation on state and federal levels that imposes religious mythology, principles, and doctrine upon the citizenry and taxpayers who may not agree with some, any, or all of their religion.

The Christian Nationalist/Dominionist views others who are not the same as they with extreme prejudice and contempt. According to them, if you do not accept or believe in their vision of who Jesus is and will not convert, then you are less than dirt. Those of us who are not religious or are religious but of another faith, or are Christian but not their brand of Christianity, all of us have targets on our backs, because as far as they are concerned, we do not have a right to exist. This makes the Conservative extremely dangerous to individuals and the American Republic.

Conservatism in its Christian expression is thus fascist and antidemocratic. It is also antisecular. It seeks to replace democracy with theocracy, remaking America into a theocratic fascist Christian state. They have no respect for American democratic principles and institutions and they spit on the United States Constitution on a daily basis. The modern day Conservative in America is carrying a cross and is wrapped in a flag. There is a reason why they are also called Christo-fascists and the American Taliban.

What is a Dominionist?

Dominionists think and actively engage in making the Christian religion the official religion of their states.

Dominionists make the claim that America is a Christian Nation.

Dominionists believe that their god will rule through them, and seek power and control through political means.

Dominionists believe that their god has given them a mandate to rule the nations of the world.

Dominionists have taken over the Republican Party and have used the GOP to push their theocratic agenda.

Dominionists have lied to their base and have used them to have themselves elected into public office.

Dominionists must be publically exposed and harshly dealt with.

An Ideology Which is Anti-fact

Conservatism disregards facts. Statements of fact is of no concern to them, as facts do not pertain to their mainenance of power, control, and influence. If a lie could be told so that their establishment and power continues they will tell it without any reservation or shame. This is why Conservatives fall all over themselves to support Donald Trump, the Father of All Lies, as every word that falls out of his mouth is not true, and the Conservatives do not care, because they are using Trump and Trump uses them, each serving the others' purpose. So long as it serves his or her purpose, a Conservative will maintain that up is down, the sky is red, and magic is real. This is why education and science do not matter to them, as well as being against intillectuals. An educated critically thinking voting public cannot be controlled, and policies based on facts and scientific thinking is not favorable to maintaining their political power. This leads us to the last point.

An Ideology That Relies on Sheeple

Conservatism does not want a well educated thoughtful public. The reason for this is because a well-educated thoughtful public asks questions and demands answers, and these are the kind of people that cannot be controlled or hoodwinked. This is not in the best interest of Conservatives for maintaining power and control over people. This is why Conservatives have a vested interest in defunding public education, disregarding science, and disenfranchising groups of people. The furtherance of Conservatism relies on voting blocs of people who vote againt their best interest, and one cannot vote against one's own best interest unless you are one of the mindless masses of people who will cut off their nose to spite their face.

Therefore Conservatism relies on a voting bloc that does not realize or are incapable of realizing that the candidates they vote for or policies that they are in favor of are really not in their favor or helpful to their everyday life. Much of the Conservative voting bloc, people who vote in favor of Conservative candidates and Conservative policies, are unaware or willfuly ignorant to the fact that what they vote for is not really in their best interest or who they vote into power will not help them in their daily lives. These mindless masses are sheeple. And because they are sheeple, nothing that you can do or tell them otherwise will sway them in any way, because they don't care about facts. They are Conservative, have always voted for Conservative policies and Conservative candidates, and always will. This has caused great problems for the rest of us living in this society. The Conservative voting bloc is dangerous and counter to democratic principles. They must be held accountable for bringing all of us under threat and endangering our republic. They must be stopped.

As has been presented here, an explanation has been provided of what Conservatism is and why it is dangerous. This ideology is so dangerous that it threatens the existance of whole groups of people and harms the greater good of both national and world civilization, as well as the existance of the natural world. It does not advance our society in any way, but rather disrupts and destroys it. The focus of Conservatism is rather on gaining and maintaining power and control over people and keeping them down. For this very reason, and for the safety and future of humanity, Conservatism cannot, must not, be tolerated nor allowed to exist any further. It is an obstacle to the advancement of a better human civilization. Conservatism must be stopped; it is an obstacle which must be removed and destroyed. If we do not do this, then humanity, and our planet, has no future.

The vehicle of Conservatism in the United States is the Republican Party. As will be shown in other essays and articles, evidence will be presented as to the great harm caused by Conservatism and its Republican Party, and what needs to be done to confront and stop them, not only in America, but also worldwide.